Everyone is familiar with the symptoms of eating spicy foods: sweating, runny nose, burning sensations, heartburn, digestive issues, and so on. However, what causes these symptoms and how to counteract them is less straightforward.

The chemical structure of capsaicin

Image from Science and Food

What allows spicy foods to have an effect on us is a chemical called capsaicin (C18H27NO3) which is found in chili peppers. A 2001 study led by Professor Josh Tewksbury aimed to discover why chili peppers began producing this chemical in the first place. The team, who led feeding trials in Arizona, found that capsaicin prevented rodents from eating the peppers while it did nothing to discourage birds. Birds, unlike humans and rodents, lack the taste receptors for capsaicin. The team determined that this could be an effective adaptation, due to the fact that mammals grind chili seeds with their molars, preventing them from germinating. On the other hand, birds do not grind the seeds and are able to disperse them far and wide (1).

Capsaicin works by binding to TRPV1 receptors on the surface of our taste buds and elsewhere. The main purpose of TRPV1 receptor cells is not to detect spicy foods, but foods that are literally hot. Yet, TRPV1 receptors also react to the presence of capsaicin. They open, allowing ions to flow through them. As a result, the sensation is transmitted through the trigeminal nerve, causing the brain to release a sensation of warmth to the mouth. 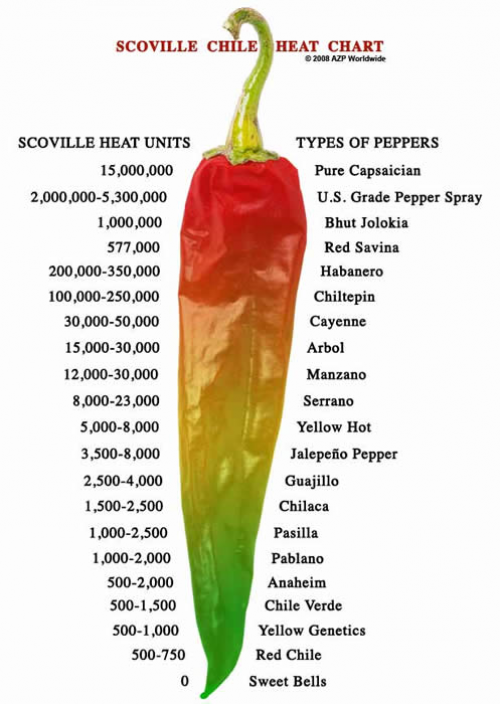 A visual of the Scoville heat index

The Scoville heat index is an imprecise method of comparing the heat of chilli peppers. It is measured by adding sugar water to a set amount of pepper extract until the heat is unable to be tasted. Because these cells are intended to react to hot foods, the central nervous system is confused by the presence of capsaicin. It reacts as if you are in danger and takes measures to get rid of the perceived threat (2).

For one, the brain believes that the body is overheating and attempts to cool it down by sweating. It also causes increased circulation, a runny nose, and watery eyes. Another result, and one that causes many people to enjoy spicy foods, is that the body releases dopamine and endorphins, natural painkillers, creating a feeling of euphoria (3).

Eating spicy foods can have many health benefits. A group of researchers at the University of Wyoming conducted a study in 2015 in which they found capsaicin could serve as a diet-based supplement. The team conducted studies with mice and found that dietary capsaicin helped to prevent obesity in all mice except for those who genetically lacked TRPV1 receptors. In the future, the team hopes to develop a natural dietary supplement using capsaicin (4).

Molecular mechanisms of the anti-obesity effects of capsaicin (A) Capsaicin can inhibit adipogenesis in preadipocyte and adipocyte by up-regulating the expression of PPARγ and UCP-1. Thus, it will stimulate adiponectin secretion and increase body fat accumulation. (B) Capsaicin can activate BAT activity, accompanied by increased expression of UCP-1 and PGC-1α. (C) Capsaicin can suppress appetite, increase satiety, and ameliorate insulin resistance. (D) Capsaicin can modulate its function in gastrointestinal tract and gut microbiome, including stimulation of GLP-1 secretion and increase in population of the gut bacterium Akkermansia muciniphila. STAT-3, signal transducer and activator of transcription-3.

Molecular mechanisms of the anti-obesity effects of capsaicin

There have also been studies which indicate that spicy foods can help lead to a longer life or contribute to a healthy heart. Creams containing capsaicin are also effective in providing pain relief to those who suffer from joint pains (5).

Despite these benefits, the symptoms of eating spicy foods can often be unpleasant. As the body’s reaction to capsaicin is meant to protect you, preventing the reaction is unlikely. However, there are ways to help cope with it.

Drinking water will not help and it will in fact make it worse. This is because capsaicin is a nonpolar molecule which dissolves when it comes in contact with other nonpolar molecules. Water is polar and it causes the capsaicin to be spread around the mouth. In order to counteract the spiciness, you should consume something containing nonpolar molecules, such as milk, other dairy products, or oils, such as peanut butter. Capsaicin is also alcohol soluble so having a drink could be beneficial. Furthermore, carb-heavy foods can help by mopping up the capsaicin while sugar and honey can help by disrupting your ability to feel the heat (6, 7).

(3) Sharma, Uma, and Alyssa Pagano. “What Happens to Your Brain and Body When You Eat a Hot Pepper.” Business Insider, 12 Oct. 2017, http://www.businessinsider.com/eating-spicy-food-capsaicin-hot-pepper-side-effects-2017-10.

0 comments on “The Science Of Spiciness”